Discover the fascinating history of Berlin and its different eras through its most important monuments.

Berlin is a metropolis that stands out not only for its remarkable selection of museums but also for the large number and great variety of monuments and famous buildings.

The city has changed profoundly following the upheavals of its recent history and very different architectural eras and styles often coexist in the same street. The German capital appears at first glance to be quite heterogeneous and architecturally chaotic. On top of this, it impressively expansive, nine times more than Paris, and contains multiple centers. Understanding its spirit, therefore, is not an easy task.

Indeed, Berlin is polycentric. The most popular hubs are certainly the districts of Mitte for East Berlin and Charlottenburg for West Berlin, but the ancient centers of Spandau and Köpenick should also be mentioned.

The urban landscape is a mix of medieval, baroque, Nazi, and communist architecture, to which have since been added the contemporary constructions of the 21st century. In many cases, important monuments and buildings are quite close to each other despite being from various eras, and as such truly seeing the city can be elusive without the help of an expert tourist guide from Berlin who has lived in the city for years.

To be able to best orientate yourself among the points of interest in Berlin, the best choice is to divide them by historical period.

MEDIEVAL BERLIN: THE MONUMENTS OF THE BEGINNING

Berlin is called the capital of the twentieth century, but not everything that deserves to be visited in Berlin dates from the last century. The city was founded in 1237 AD. Very little remains of this era, and what little is visible today is not of great artistic importance. Of the ancient historical center, built from the 13th to the 15th centuries, we can mostly only admire reconstructions, such as the St. Nicholas Church (Nikolaikirche), or buildings that miraculously survived the bombs and the destructions of the following centuries, such as St. Mary’s Church (Marienkirche) of 1250.

Of note, on the other hand, is the fortified citadel of Spandau, considered one of the most important European Renaissance fortresses. This 16th century architectural monument is located at the northwestern end of Berlin, in the Spandau district.

CLASSICAL BERLIN: THE MONUMENTS OF THE 18TH AND 19TH CENTURIES

Between the 18th and 19th centuries, Berlin became a capital of European significance. The royal house of the Hohenzollern increased its power and, consequently, the city grew and acquired prestige: thus began the competition with other main European cities. Around Museum Island and along the boulevard Under the Linden Trees (Unter den Linden) are many of the buildings and monuments that make Berlin a city admired for its architecture, and which allowed the house of Hohenzollern to boast the beauty of its capital.

During this phase, the first Berlin Cathedral (Berliner Dom), the Royal Palace, the Brandenburg Gate and the Reichstag Palace were built. Two buildings classified as examples of late Baroque architecture date back to this period: the Charlottenburg Palace and the Köpenick Palace.

The New Synagogue, on the other hand, is an interesting example of 19th century Jewish architecture, a time when some of the most important parks in Berlin were also designed, including Victoria Park and the Tiergarten, as well as symbolic monuments such as the Victory Column and the national monument to Bismarck. 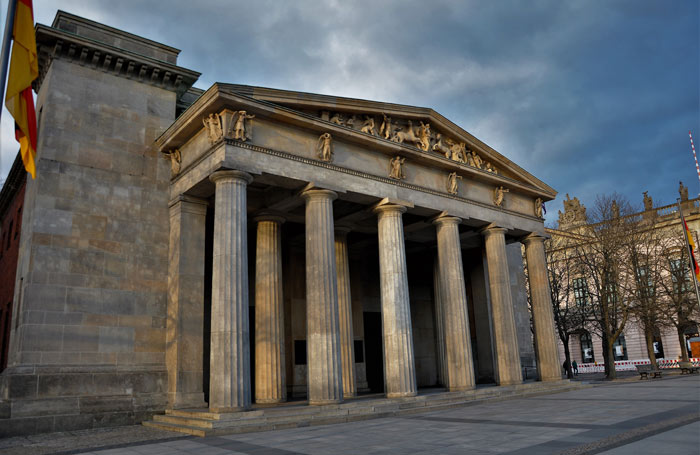 BERLIN OF THE FIRST YEARS OF THE 20TH CENTURY: THE MONUMENTS OF MODERNITY

From the end of the 19th century to the beginning of the 20th century, the architecture and the urban layout had to be rethought due to the incredible demographic growth of the city, which went from 800,000 inhabitants in 1871 to 4,000,000 in 1925. The architects from the Bauhaus School of Architecture in Berlin built the buildings that are now symbolic of the beginning of the 20th century and protected by UNESCO, such as the residential complexes created between 1913 and 1934 (Siedlung Schillerpark in Wedding, Großsiedlung Britz in Neukölln, Wohnstadt Carl Legien in Prenzlauer Berg, Weiße Stadt in Reinickendorf, Großsiedlung Siemensstadt in Charlottenburg and Spandau, and the Gartenstadt Falkenberg).

The buildings by Peter Behrens in Alexanderplatz, which frame the Urania World Clock, the wonderful Shell building a few meters from the New National Gallery in West Berlin and the Hackescher Markt Courtyards in the so-called “Jewish quarter” of Berlin are classic examples of early 20th century Berlin architecture.

BERLIN IN NAZI GERMANY: THE MONUMENTS OF THE 30s AND 40s

The Nazis always had an ambiguous relationship with Berlin. Their project was to rebuild it from its foundations, replacing it with a city that would have been called “Germania”. The project did not go very far, and most plans stopped at sketches and papier-mâché models. A few examples remain of the work of Albert Speer, the fetish architect of Adolf Hitler at the head of the “Germania” project, including the public lighting of the boulevard Kaiserdamm in the Charlottenburg neighborhood.

This does not mean, however, that there are no Nazi-era buildings worth visiting in Berlin. The most spectacular are undoubtedly the 1936 Olympic Stadium, at the western end of the city, and the old Tempelhof airport, on the border between the districts of Kreuzberg and Tempelhof. Other interesting examples of architecture under the Nazis include the headquarters of the Nazi Aviation Ministry (now the seat of the Federal Ministry of Finance) in Niederkirchnerstraße, the Central Bank of the time (today the Ministry of Foreign Affairs), and the great architectural complex of Fehrbellinerplatz. 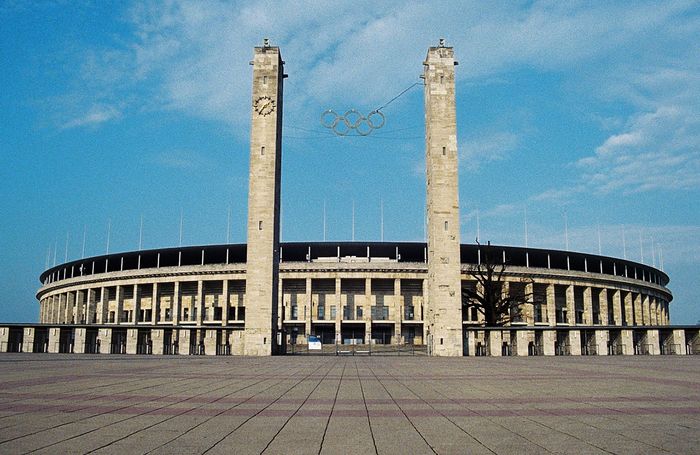 POST WAR BERLIN: THE MONUMENTS OF MEMORY AND PROPAGANDA

Many of Berlin’s monuments from the second half of the 20th century are linked to the historical memory of the National Socialist dictatorship. From the 1950s to the present, buildings and monuments have been built that seek to find an architectural language that gives full weight to the memory of the wars and crimes committed by the dictatorship of Adolf Hitler, and at the same time reconciles this country with the states and people who were subjected to Nazi invasion and oppression. One example of this language of memory is the documentation center of the Topography of Terror.

There are also two memorials in Berlin dedicated to the Soviet soldiers who liberated the city in April 1945 (one in the Tiergarten and the other in Treptower Park); examples of Stalinist architecture built by the Soviets themselves recall the point of view of the winners of the Second World War.

As for the German historical memory, it is worth visiting the New Guard (Neue Wache) on the boulevard Unter den Linden, a symbol of the common pain of all the peoples involved in the war, and the monument to Claus von Stauffenberg, Hitler’s attacker in operation Valkyrie, in the German Resistance Museum near the Tiergarten park. In this context, it is certainly interesting to visit the Church of the Memory of the Prussian emperor Wilhelm I, in the area of the Berlin Zoo, where the ruins of the old church destroyed by the bombs of World War II are combined with a new building.

The most important monuments to the memory of the victims of National Socialism are the Memorial to the Murdered Jews of Europe, the Memorial to the Sinti and Roma, and the Memorial to Homosexuals murdered by the Nazis. Equally touching and visible throughout the city is the Stumbling Stones (Stolpersteine) initiative; financed by private citizens, thousands of bronze cobblestones recall the Berliners killed by the Nazis in front of the houses where they lived and where their deportation began.

Post-war Berlin was not only built to recall the tragedy of the German 20th century, but also to design the future. The TV Tower at Alexanderplatz is perhaps the most important symbol of 1960s socialist Berlin. In West Berlin, the ICC congress center and some commercial buildings of the boulevard Ku’damm stand out.

Then there are two areas, one in West Berlin and the other in East Berlin, that we particularly recommend visiting, and which are attempts to translate into architecture what the future promise was of the two dominant ideologies in Berlin in the second half of 20th century. Karl-Marx-Allee in Friedrichshain is an impressive example of socialist architecture, as well as being the most ambitious urban project of the communist era: a boulevard over two kilometers long with houses, cinemas, and shops starting at Alexanderplatz and ending at Frankfurter Tor.

In West Berlin, the Hansaviertel district is the capitalist response to the construction of Karl-Marx-Allee: a collection of buildings built by the most prestigious 20th century architects (Gropius, Alvar Aalto, Niemeyer) that depict a garden city looking to the future. 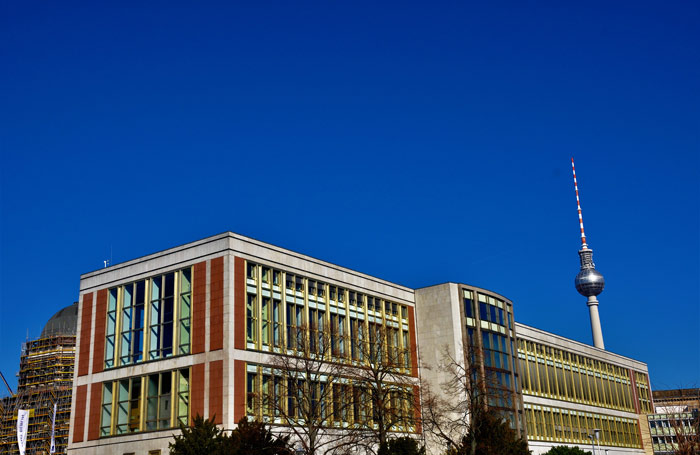 MONUMENTS OF THE PRESENT: THE BERLIN OF THE 21ST CENTURY

Berlin is continually reinventing itself, and since the reunification took place after the fall of the Wall, several buildings have been built that changed the face of the German capital. Potsdamer Platz with the Sony Center and the new skyscrapers around the Kaiser Wilhelm Memorial Church are examples of the architecture and urbanism of the 2000s.

Another impressive work is the new central railway station. Inaugurated in 2006 for the World Cup, Hauptbahnhof is Europe’s largest railway station and its glass roof is a magnificent work of engineering.

Also representative of this period are the buildings of the Chancellery and those annexed to the parliament (in particular the congress library and the press room). These buildings have very explicit architecture, which shows how the German government wants to be seen: the idea of transparency plays a fundamental role not only in the choice of construction materials, but also in the layout of the buildings.

Another monument that must absolutely be visited when in the German capital is the Berlin Wall Memorial (in German the Gedenkstätte Berliner Mauer). Built in 1998 in honor of the victims of the Wall, it is placed along Bernauer Straße. 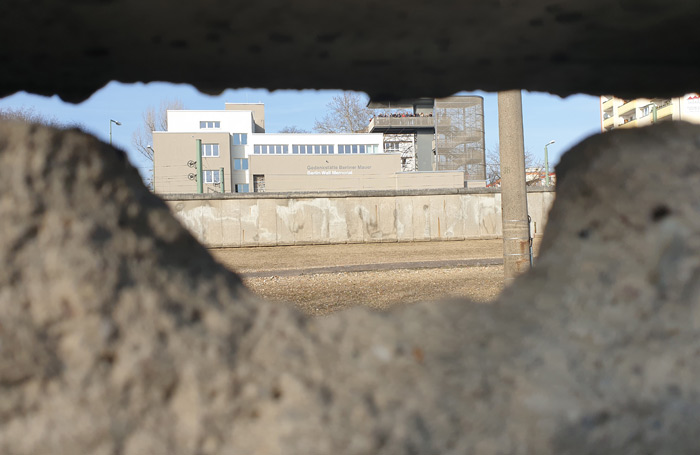 A visit to the German capital is a journey that leads us to confront our civilization. Walking through Berlin means walking through our shared history, because, regardless of where we come from, all the central themes of the contemporary world have their own monuments in this city.