What is the typical Berlin food? The city offers a wide range of possibilities, with local products and typical cuisine.

For many travelers, having the opportunity to discover new aromas, savor new flavors and get in touch with new ways of cooking is one of the major attractions and great pleasures of the journey. Many people venture into new gastronomic worlds when they travel, to be surprised and to further enrich the already delicious adventure of the journey.

If you fall into this category of travelers and want to get to know Berlin cuisine or simply want to know what to eat in Berlin, the following information will be of interest to you. 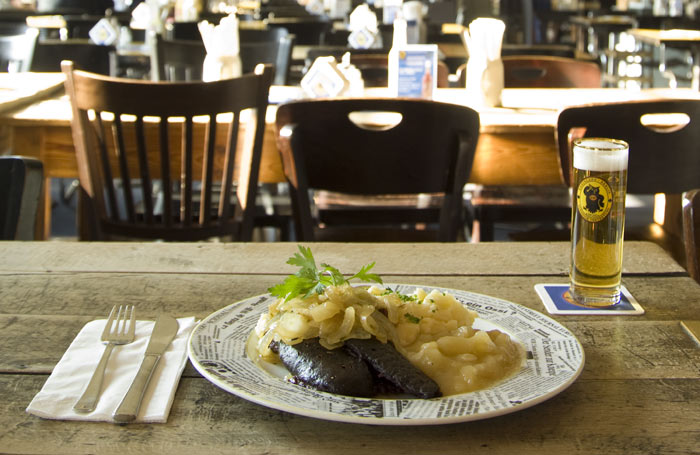 THE REASONS BEHIND TYPICAL BERLIN CUISINE

Berlin has always been a complex city and strongly impacted by migratory processes. In the 700s thousands of French Huguenots arrived in the city, and a century later, workers from all over the country arrived, as occurred in many industrial cities, while in the 1900s brought immigrants from Asia, southern Europe, and Turkey. This has changed the food eaten in the city as each culture has made its own contribution, and it is now the product of recipes coming, first from other German regions, and then progressively from all over the world.

Beginning in the eighteenth century, the French and Austro-Hungarians began making modification to what was originally a very simple style of cooking. The reason for its simplicity? Berlin has very poor soil and a very harsh climate, which means that for centuries agriculture had very little to offer Berlin’s palates. The sea is distant and the forests that surround the city have been hunted in excess, so much so that the presence of game was drastically reduced, and the meat of wild boar or deer became extremely expensive.

In addition, Protestantism, the dominant religion in these lands and the enemy of physical pleasures that tend towards hedonism, further contributed to the absence of different ingredients and spices. Furthermore, in the last two centuries Berlin has been a city of workers who toiled hard in large industrial chains, and their cooking was designed to fill and energize. In Berlin they ate to gain strength for their long shifts, not for pleasure.

All this has progressively changed over the years, with migrants not only bringing new recipes, but also their relationship with food. Today more and more Berliners are dedicated to the pleasures of good food, and globalization combined with the recovery of lost traditions are now making Berlin’s gastronomy increasingly attractive.

Berliners are increasingly inclined to travel and discover new foods; eating has become a central theme in many people’s identity under the motto “tell me what you eat, and I’ll tell you who you are“. 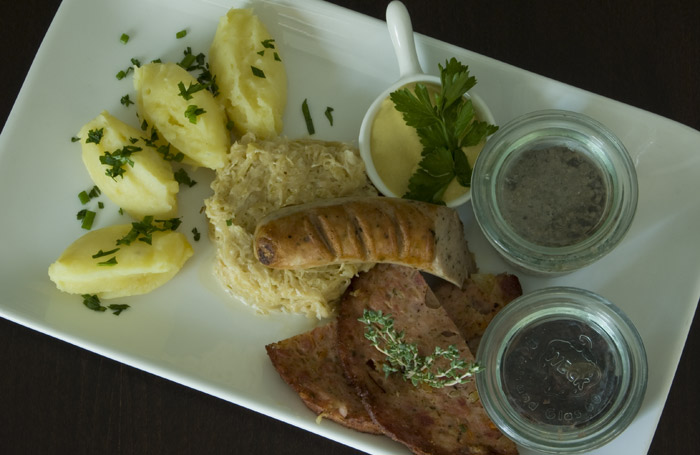 WHAT DO YOU EAT IN BERLIN?

In Berlin we eat a lot of Asian food (Turkish, Vietnamese, Hindu, and Thai), as well as a lot of Italian, Greek and more and more American (especially from the United States and Peru) but also Russian, Yugoslavian, Tibetan, Spanish, French, and Brazilian.

Eating in Berlin can be a culinary journey into different cultures and styles. One typical characteristic of Berliners is eating out, which is why the selection of restaurants is remarkable and the prices are moderate.

From Michelin-starred cuisine (Berlin is the German city with the most Michelin-starred restaurants) to street food (those just arriving in Berlin are often surprised that metro stations always smell of food), from traditional pork-based food to newer vegetarian or vegan trends.

All those who can’t live without their own native dishes can come to Berlin without fear; the city has virtually every type of restaurant, some of a very high quality, so you won’t have to feel homesick. However, we recommend trying new flavors, as it is certainly one of the fundamental aspects of every journey and an important part of getting to know a place.

What is now considered typical Berlin food is the product of the great migrations of the second half of the 19th century, when Berlin became the third most populated city in the world.

The farmers of Silesia, Pomerania, Prussia, Bohemia and the French Huguenots combined their recipes and brought different ingredients that marked the beginning of what is now called “Berliner Küche”, or Berlin cuisine.

It is a rather heavy cuisine, designed for winter and to give energy to those who had to work hard. 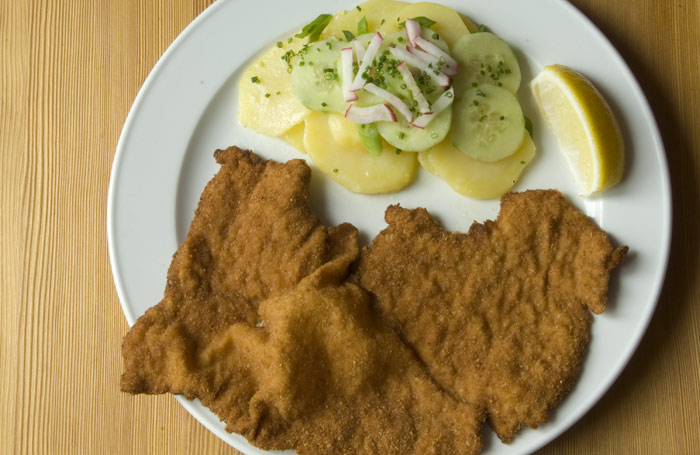 Traditional Berlin cuisine is dominated by potatoes, pork, and sauerkraut. For a long time, there were no changes or reinterpretations and meals remained unchanged over the years. Today, the situation is changing, and some restaurants have rediscovered regional cuisine as a source of inspiration and renewal. In Berlin, the portions are usually generous, and people eat a single dish.

– Eisbein (pronounced “ice-bine”) is the typical pork shank. There are two varieties: roasted (Haxe) or boiled. The roasted one is the most typical and the tastiest, and normally the dish is served with mashed potatoes or peas and marinated white sauerkraut. I recommend ordering this without appetizers, since the portions are abundant (about 1Kg), so even if you share it between two people, it will be enough.

– Schweineschnitzel: a thin slice of breaded and fried pork, usually in lard. It is usually accompanied by a mushroom sauce and the typical Bratkartoffeln, potatoes boiled al dente and then sautéed with bacon and onion.

– Kassler: a smoked and marinated pork loin, it is said to have been created by a butcher very close to our meeting point at Potsdamer Platz, at the end of the 19th century. Accompanied by Bratkartoffeln (potatoes boiled al dente and then fried with onion and bacon) it is one of the most popular dishes among Berliners.

– Königsberger Klopse: meat and fish balls, served in white sauce and capers. It is a recipe that comes from the city of Kaliningrad, which became Russian territory after the Second World War, but for the previous 800 years had been Königsberg, the capital of East Prussia.

– Havel-Zander: zander (or pike-perch) from the Havel river with potatoes and butter.

– Bauernfrühstück (country breakfast) with smoked meat and cucumbers served with a couple of fried eggs. 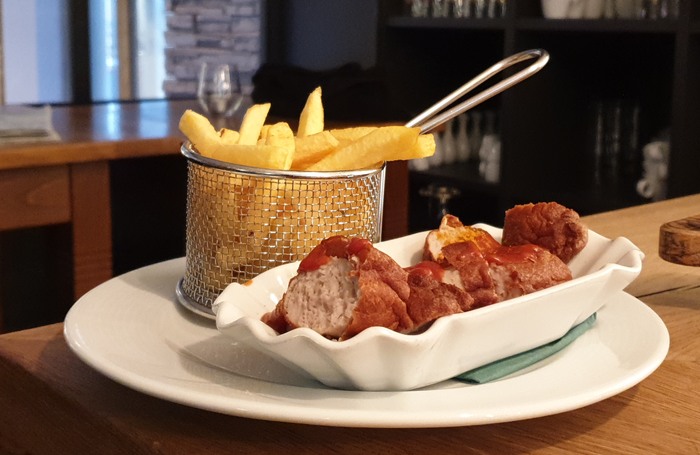 The selection of street food is very broad and constantly increasing, here I focus on the three great classics:

– Döner Kebab: this Turkish sandwich is the most popular street food in Berlin. It is said that the idea of putting a typical Turkish dish in a loaf of bread was born in Berlin (there are two people competing for this claim to fame). It contains layers of very thinly sliced meat flavored with spices, then cooked in a vertical grill. Today, Germany is an exporter of Döner, and it is not uncommon for Kebab stores in Italy to have Turkish-German equipment brands and products.

– Currywurst: this preparation of grilled sausage with curry sauce is a post-war product that arose when the American military brought Ketchup and the British brought Curry. As with the Döner, there is some doubt about its inventor. In East Berlin there is a place called Konnopke’s Imbiß, which claims to have invented this Berlin sauce.

– Hamburgers: the recent North American migration to Berlin (about 20,000 Americans living in the German capital) brought a wave of restaurants and bars offering this dish, prepared artisanally.

– “Markthalle” and “Max und Moritz” in the Kreuzberg district;

– “Sophieneck” and “Brauerei Lemke” in the former Jewish Quarter;

– “Berliner Republik” or “Augustiner am Gendarmenmarkt” at Mitte district;

Don’t forget that if you take part in one of our Private Tours of Berlin, you can ask our tourguides for specific advice on the restaurants and types of food the city offers. If you have any questions, don’t hesitate to contact us!