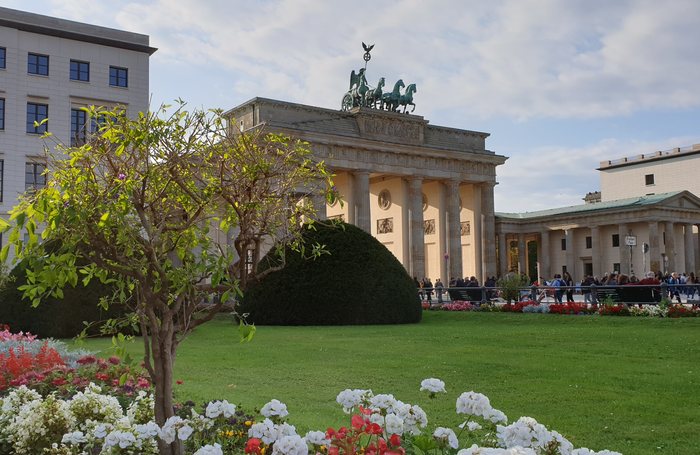 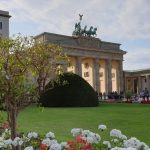 The "Brandenburger Tor" or Brandenburg Gate: the best way to enter Berlin!

The Brandenburg Gate (Brandenburger Tor) is one of the most important monuments in Berlin and perhaps the most famous in Germany. Undoubtedly, this is a must for those visiting the German capital and is, of course, an integral part of our guided tours of Berlin in English.

A symbol of German reunification in 1990, the Brandenburg Gate is a perfect example of how a monument is not just a construction or a building, but above all it is what the visitor’s gaze projects onto it.

From its construction in the late eighteenth century to the present, the Brandenburg Gate has been admired by generations of Berliners and has been associated with very different feelings and symbols: from the consecration of Prussia as a power of Central Europe, to the saddest moments of Nazism and the Berlin Wall.

The appearance of the Brandenburg Gate has scarcely changed over the years, but its meaning has varied dramatically through the different phases of Berlin’s history. 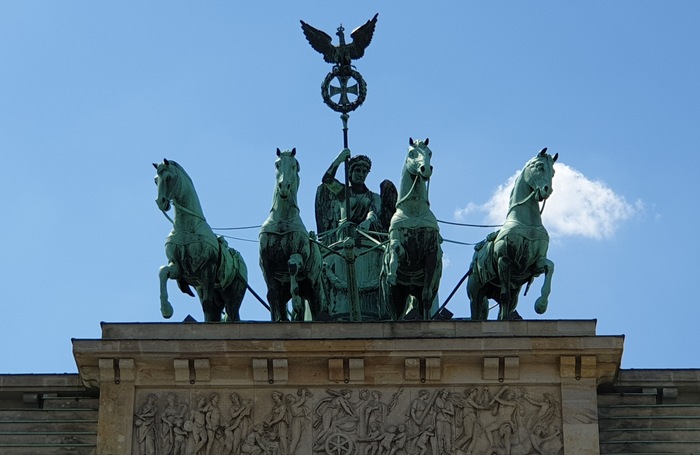 THE ORIGIN OF THE BRANDENBURG GATE: THE CONSECRATION OF A KING

Brandenburger Tor stands on what was the border of the Prussian capital, beyond which were the forests of Brandenburg and the hunting reserve of Berlin: the Tiergarten.

The Brandenburg Gate was commissioned by Friedrich Wilhelm II of Prussia, one of the most contradictory rulers of his time, so much so that he was nicknamed “der dicke Lüderjahn” by his subjects, the fat scallywag.

Friedrich Wilhelm called for an alliance between Prussia, the Netherlands, and Great Britain in the style of the Delian League of Athens, with himself in the role of Pericles. The union was to lead to a new era of well-being and peace. This is why the motifs and style of the door are those of classical mythology, with strong references to the Acropolis of Athens. The very name of the Gate at the time of construction bears witness to the king’s intentions: in 1791 it was inaugurated the “Gate of Peace“.

From its construction and until 1918, the year of the fall of the German monarchy, only the royal family and their guests could cross the central arch of the Gate. All other travelers used the side “wings”, where the customs offices were also located. 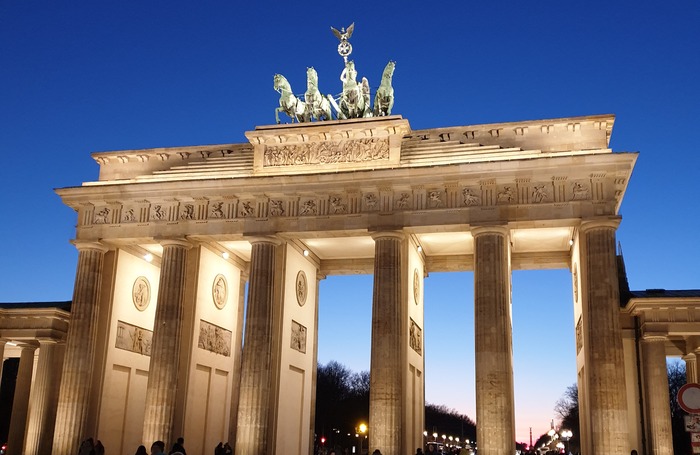 THE DOOR OF BRANDENBURG: FROM A SYMBOL OF PEACE TO A NATIONALIST MONUMENT

Originally, the Quadriga on the top of the Gate and driven by Nike – the Greek Goddess of Victory – were to symbolize Peace. With the beginning of the nineteenth century things unfortunately had to change.

The Iron Cross, conceived by the famous Berlin architect Schinkel and placed inside the laurel wreath in 1814, would become one of the most famous Prussian and German military awards. In fact, it was created to celebrate the fighters of the wars of independence, the battles against Napoleon, after he invaded Berlin in 1806 at the head of the French army.

It was from this initial defeat that the administrative and military reorganization of Prussia in the modern sense began. Indeed, this episode would influence the actions and ideologies in Germany during the German Empire (1871 – 1918) and in Nazi Germany (1933-1945).

Once Napoleon was defeated, the Peace Gate became the Brandenburg Gate. 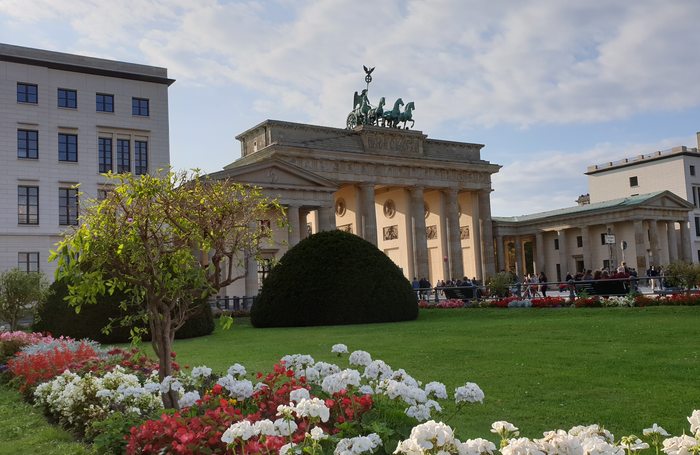 A SYMBOL OF GERMAN REUNIFICATION

After the end of the Second World War, Berlin and Germany were divided into four zones of occupation, administered by the Allies and the Soviet Union. Already in 1949 the zones of occupation had become independent political entities: the Federal German Republic (West) and the German Democratic Republic (East) were born.

The Brandenburg Gate once again became a border area. But crossing it did not mean crossing the border between the Prussian capital and the forests of Brandenburg. In the immediate post-war period, crossing the Gate meant crossing two very different worlds: on the one hand the liberal and capitalist West, on the other, Soviet-inspired communist authoritarianism.

In 1961 the differences and contrasts between these two spheres of influence, including at the international level, would lead to the construction of the famous Berlin Wall. Throughout the life of the Wall (1961 – 1989), the Brandenburg Gate remained inside the so-called “No Man’s Land“, the strongly militarized strip that was created between the actual Berlin Wall and the protective wall built just behind it, so that the East German People’s Army could better monitor the border.

Right in front of the Brandenburg Gate, Ronald Reagan, then president of the United States of America, gave his famous speech in 1987, when he will address the head of the Soviet Union with the following words:

These words are mixed in our memory with the tears of the Berliners who, on November 9th, 1989, at the fall of the Berlin Wall, were finally reunited right under the Brandenburg Gate, which for so long had been one of the symbols of their division.

Napoleon => after the occupation of Berlin in 1806, he transported the Quadriga (located at the top of the Brandenburg Gate) to France, with the intention of installing it over the Arc de Triomphe in Paris.

Adolf Hitler => he converted the Gate into a symbol of his power. Under its arcades, countless Germans marched towards disaster, convinced by the authority and the charisma of their Führer.

Ronald Reagan => the Door was the background of his famous speech held in Berlin in 1987.

HOW TO GET TO THE BRANDENBURG GATE IN BERLIN

– With our private tours ESSENTIAL BERLIN or ALL OF BERLIN.