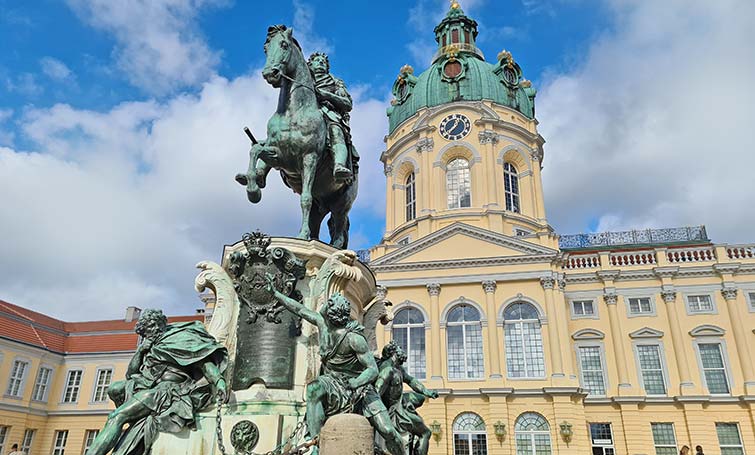 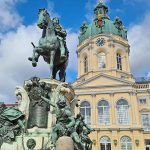 The Charlottenburg Palace, one of the most enchanting places in Berlin.

One of the most beautiful places to visit in Berlin, for instance with our “All of Berlin” city tour, is the Charlottenburg Palace. Located northwest of the city center, the palace is a splendid example of 17th century Baroque architecture.

Its gardens extend over 55 hectares and are definitely worth a walk: elements of Baroque, Rococo and Romantic gardening are combined in them.

A PALACE AS A SYMBOL OF A NEW ERA

Frederick I. of Prussia – the first Prussian king – decided to build a new residence outside his capital, Berlin, showing off his aspirations for greatness.

However, it was Frederick’s grandson, Frederick II. the Great, who made Prussia a feared power in all of Europe and thanks to him, Berlin finally emerged from the margins of history.

Frederick the Great resided in Charlottenburg Palace and ruled from there during his first years on the throne, at least until the construction of Sanssouci Palace in Potsdam was completed.

QUEEN LUISE, THE HEART OF A KING AND THE FIRST EMPEROR

Another important figure of the Prussian monarchy who lived in Charlottenburg was Queen Luise.

She was born before the idea of unifying Germany under one flag gained many followers, and became after her untimely death one of the symbols of German nationalism.

Her son, Kaiser Wilhelm I, became the first German emperor, fueling the myth of his mother as the embodiment of all Prussian virtues.

Luise was a very popular figure and some historians have compared her to Lady Diana of England. Her mausoleum, built at the behest of her husband, can be visited within the grounds of Charlottenburg Palace.

There they were buried in the following decades also:

CHARLOTTENBURG PALACE DURING AND AFTER WORLD WAR II

The palace ceased to be used by the royal family at the end of the 19th century. World War II bombs destroyed 60% of the building, but fortunately much of the furniture and paintings were saved in bunkers and basements.

In the first months after the end of the war, Berliners ransacked the ruins in search of materials to heat their homes. Almost 250 years after the palace was inaugurated as a symbol of Prussia’s aspiration for greatness, Charlottenburg became an unmistakable example of the total defeat of that ambition. 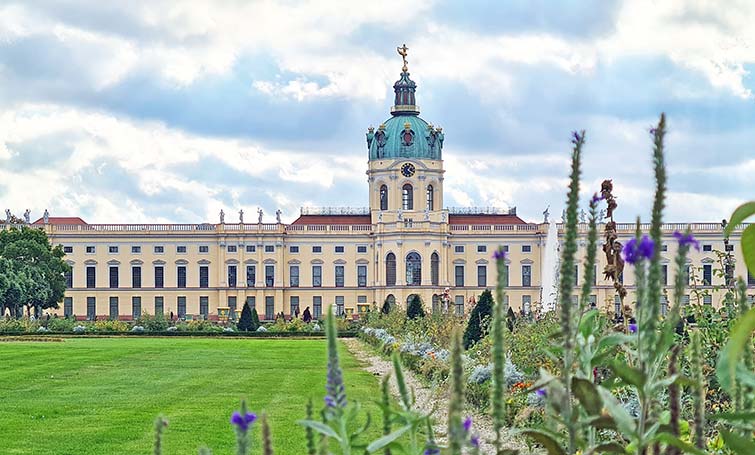 A NEW BEGINNING FOR CHARLOTTENBURG PALACE?

When we stand in front of the palace today, it is hard to imagine that what we are admiring is not even 75 years old. Photographs from the late 1940s and early 1950s confirm this: the imposing building of today is only a few decades old.

The Charlottenburg Palace was badly hit, as was the Royal Palace of Berlin on Museum Island, by Allied bombing during the war. After the war, the reconstruction of historic buildings was not a priority: it was necessary to give a home to the millions of Germans who had lost everything.

The two ruined buildings represented a time gone by. The monarchy had fallen in 1918. Germany, administered by the Soviets, the Americans, the British and the French, needed to look forward. That Schloss Charlottenburg has been rebuilt is a minor miracle.

REBUILDING A SYMBOL OF MILITARISM AND IMPERIAL NATIONALISM?

In 1945 Hans Scharoun – the architect who years later would design the world-famous Berlin Philharmonic Orchestra Hall – became a building inspector for the city of Berlin and asked the Allied authorities to try to save the city’s buildings.

His only ally was the director of the foundation in charge of the Prussian buildings in Berlin, Margarete Kuehn, but both received this official answer from the Allied authorities: “It is not our task to save buildings that are only an expression of Prussian imperialism”.

The commanders of the four powers shared this point of view and recalling Prussia was not advisable in the immediate post-war period. Among other things, in 1947, the Allies decreed the final dissolution of Prussia, which was born in the sixteenth century and then established itself as a continental power. This was the argument: “The state of Prussia, (…) has always been the vehicle of militarism and conservatism in Germany”. 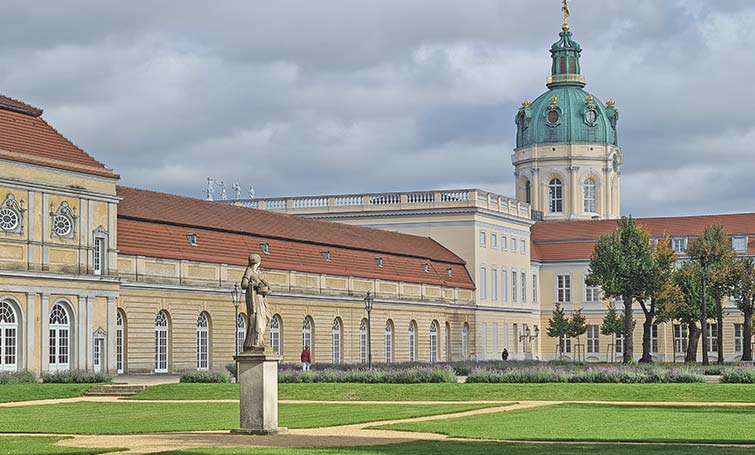 A MIRACLE OF THE COLD WAR: THE RECONSTRUCTION OF CHARLOTTENBURG PALACE

The communists in East Berlin decided in 1950 to blow up the ruins of the Royal Palace. It was an action in line with the perception they had until then shared with their Western allies.

Times, however, were changing. For the West, it was suddenly no longer central to erase the traces of Prussian imperialism, but to differentiate itself from Soviet Stalinist imperialism.

In West Berlin, it was therefore decided to be more respectful of the architectural heritage and the process of preserving the ruins of Charlottenburg Palace began, which would later lead to its reconstruction.

The Americans, British, and French no longer saw Charlottenburg as a symbol of an enemy kingdom, but as an opportunity to prove they were better than the Soviets; thus, the Cold War allowed the Prussian rococo to recover one of its gems.

THE RECONSTRUCTION OF CHARLOTTENBURG PALACE

“Seeing the building in ruins was not bleak, because in front of me I always had the intact appearance of yesterday and therefore also the restored appearance of tomorrow.” Margarete Kuehn.

Between 1943 and 1945, more than 1,700 historic buildings were systematically photographed at the request of Adolf Hitler. Those half-million slides saved for future generations images of a heritage that would have been lost otherwise completely during the war.

Among these photographs were 400 pictures of the Charlottenburg Palace.
Because of those pictures, the reconstruction was not limited to the rebuilding of the facades, but also included many of the interior spaces.

Much of the furniture and paintings have returned to the rooms of the palace and today you can walk through its halls with the feeling that nothing has been lost. 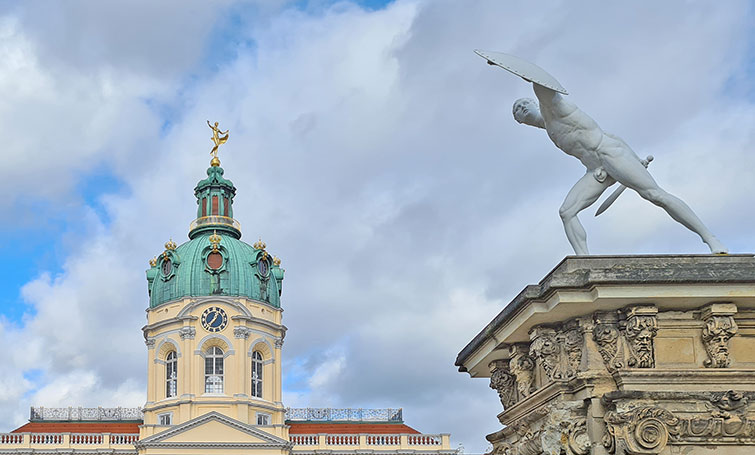 There are at least 36 palaces in Berlin, including large and small ones. Some, such as those on Museum Island, are just facades that recall what they once represented; others, such as Koepenick or Glienicke’s castles, are located far from the center. The Charlottenburg Palace, on the other hand, is centrally located and a building that allows us to recall the 18th and 19th centuries.

It is worth visiting it both outside, to admire its facade and it’s beautiful gardens, and inside to discover its sumptuous rooms.

While the entrance to the gardens is free, the palace houses a museum for a fee.
Additionally, around the palace there are two important Berlin Art museums of painting which would be a shame to miss:

– Berggruen Museum: an outstanding collection of Picasso, Giacometti, Klee and other modern classics;

– Scharf-Gestenberg Museum: with works by Goya, Magritte or Dalí and the world of Surrealism.

HOW TO REACH CHARLOTTENBURG PALACE

By subway: lines U2 Sophie Charlotte Platz station and U7 Richard Wagner Platz station (in both cases you have to walk more than 1 kilometer).

With our Berlin Private Tours.