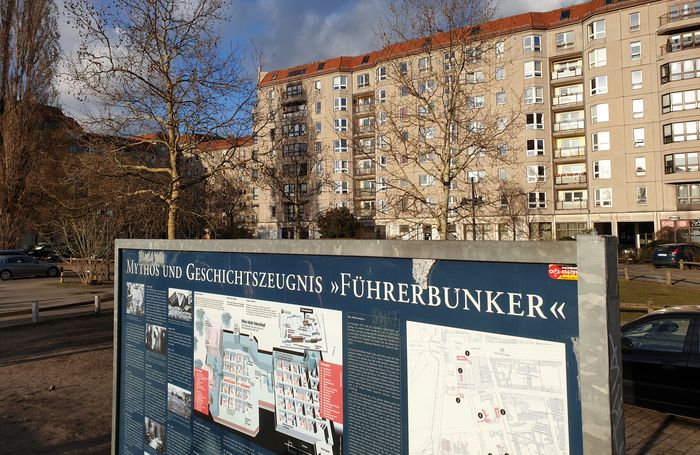 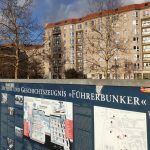 The place where Hitler finally died in Berlin.

The Berlin Bunker where Adolf  Hitler commited suicide on April 30, 1945 is today the most visited parking lot in the world.

In this short article I will explain the fascinating story of Hitler’s Bunker, although I may well have entitled the post in an alternative way: “How a guide can turn a parking lot into a place worth visiting“. But now let’s see why!

To tell you the truth, every time I come to this place  I wonder what can make it really attractive, but on the other hand, every time I finish telling the story, I better understand its true meaning and relevant importance compared to other places told and visited during our english walking tour of Berlin.

Because this is a place that forces me to reconstruct in words what the bombs have completely destroyed and it is also the right place that reveals Hitler exactly in his historical importance.

WHAT IS A BUNKER?

The word bunker, whose origin, as you can guess, is German, refers to a reinforced concrete construction. It’s usually an underground place and serves as a shelter during bombardments.

During the Second World War similar constructions proliferated in most German cities and also in Berlin there were several types: the most famous of all is called Hitler’s Bunker.

Most of these structures in Berlin were elevated bunkers and some can still be visited. But this is not the case for Hitler’s Bunker, which is just a memory and a few surviving blocks of concrete.

THE STORY OF HITLER’S BUNKER IN BERLIN

The so-called Hitler’s Bunker in Berlin is a place of pilgrimage for many visitors. Despite the truth, at least at the moment, it is more or less just a parking lot.

Certainly, back in the days that space housed the building in which Adolf Hitler spent his last months of life, a building that was built from 1943 in the underground of the Chancellery gardens. A concrete colossus of impressive dimensions, for a total of 540 square meters, located at a depth of about 8 meters!

The famous bunker consisted of two parts, each with different functions: one was intended for the dictator and his personal environment, the other was addressed to the bureaucratic apparatus.

Andy es, this is also the place where Hitler married Eva Braun and then took his own life. It was in this place that the myth of his survival arose; a myth fuelled by the fact that the body found had been totally burned and any visual identification was practically impossible.

What we know about those last few months comes from the testimony of the people who were there. Many of them were questioned by the Allies and some spoke to the media again decades later. Based on these stories and existing documentation we can get a more or less clear idea of what happened.

Many of these sources were also used for the film “Downfall / Der Untergang” in 2004. And it was precisely this film that turned this place, which Germany itself had almost forgotten, into a real tourist attraction.

Although the building was destroyed after the war and most Berliners did not know where it was, today Hitler’s Bunker is an essential sightseeing spot for many visitors to Berlin. Many groups with their guides gather daily in the middle of an insignificant space that, at first glance, could be associated with the outskirts of any city. But instead we are in the heart of the former German capital.

Various guides who pass through here, sometimes humorously and sometimes with a certain solemnity, try to translate this space to those who arrive in the capital of Germany. Sure, looking for traces of this central figure of the 20th century in this particular place, requires quite some imagination and a professional tourguide is essential.

There is simply almost nothing left. If we would excavate the grounds, we would find blocks of concrete and perhaps a few everyday objects. The remains of walls more than three meters deep and the ceiling will most certainly raise the questions of archaeologists in the future, questions that probably not even those who lived at that time would be able to answer.

HITLER AND BERLIN: A COMPLICATED RELATIONSHIP

The truth is that Berlin has found no other way to approach the man it never wanted but for whom it has inevitably become linked to. Hitler never liked Berlin very much and according to his words, Berlin was never a “city of national movement”, which is what the Nazis called Hitler’s political ambitions. However, when you say “Berlin”, the whole world immediately thinks of those 12 years when Hitler ruled Germany.

Perhaps this place conveys to us how the Germans have placed themselves and still relating  themselves to the Nazi times, especially when compared to the monuments dedicated to the various and numerous victim groups.

In fact, while the victims of the Nazi dictatorship have in the Memorial to the murdered Jews of Europe or in the Memorials dedicated to the Roma and Sinti and homosexual victims of the Nazi persecution reached a prominent place in the collective memory, thanks also to tangible exhibitions located in the immediate vicinity of the place where Hitler’s New Chancellery was located, the tyrant himself deserved nothing more than an empty place, which does not invite us to forget, but rather to reinterprete constantly its importance.

His crimes will never be forgotten, but they are now only worth to be told in a parking lot. For a man who wanted to be at the centre of the world, this seems undoubtedly an unflattering destination.

HOW TO GET TO HITLER’S BUNKER IN BERLIN

– With our private english walking tours „Essential Berlin“ or with the „All of Berlin“ Tour. Get to know this unique place better accompanied by an expert Vive Berlin  tourguide in native english language!